Let me start this story by saying that insanity probably runs in my family. Really, there’s no other possible explanation for the hare-brained scheme I’m about to reveal. All I can say is that I had the best of intentions for attempting what I did, even if the act itself was borderline criminal.

I just spent four years in Alaska and I came away with a big time craving to defrost my bones. And there’s no better place for that than Maui, Hawaii. The sun always shines in paradise. And lucky for me, paradise is where my sister and her husband lived. When they invited, I didn’t hesitate.

Well, that’s not entirely true. There was one major issue. I had a much beloved tabby cat and his name was Oscar. 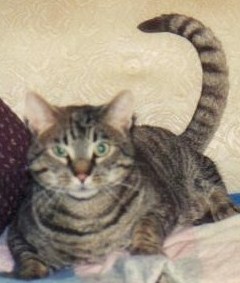 The problem as I saw it was the state of Hawaii. They had this unbelievable law against bringing pets to their islands. Under the guise of rabies control they enforce a Livestock Quarantine. Back then it was a four month incarceration in a critter penitentiary, all to ensure no animal came to Hawaii with the dreaded rabies virus. And they charged pet owners over $700 to do it.

I was horrified. I mean, I hate rabies and all, who doesn’t? But I also hated the idea of Oscar being stuck alone in a cage for four long months. You know how long that is in cat time? 3 ½ years! Plus, the 16 acre compound rivaled Ft. Knox with its security systems, sky high fences capped with razor wire, and row after row of cages, kennels, and check points.

Hawaii was serious about being rabies free. I was serious about Oscar not enduring hard time at Kitty Penn. So I began to form a plan to bypass quarantine. It took me a couple days, but I hit upon something completely foolproof.

What if I pretended to be pregnant and smuggled my cat in under a giant maternity top? Surely no one would question that, right?

The more I thought on it, the more I liked it. I was in Seattle, along with my brother and his wife, so I ran the idea by them. At first they totally freaked, but I won them over with the simplicity of my devious plan. Plus, my sister-in-law had a key role to play. She’d had a baby, I had not. I needed her expertise.

A trip to the local thrift store got me a maternity outfit and one of those baby snuggle harnesses that straps across your shoulders to rest your bundle of joy in front of you. Confident in my cleverness I raced back to my brother’s place, sewed up the leg holes and donned the snuggie first, then the new outfit. It was perfect. After my sister-in-law drilled me on the oh-my-aching-back walk, I perfected it too.

The real kink in my plan was Oscar. He hated the snuggie with a passion. But I expected that, so step two involved the services of a qualified veterinarian. My brother had a friend in the business, so I made an appointment. Then I lied like the total schemer I was and told him Oscar needed sleeping pills because the sweet kitty wasn’t a good flyer. He needed to be totally knocked-out for at least 5 hours, the span of airtime between Seattle and Maui.

Here’s where I felt the first twinge of guilt. The vet gave me a few pills for free. I mean really, if one is going to break the law, one should at least pay for the drugs needed to complete the dirty deed.

Travel day arrived. The pills took 45 minutes to take affect, the same amount of time it took to drive to the airport. So while my brother loaded my suitcases into the car, I battled Oscar to make him swallow a pill. Naturally I won, but Oscar was deeply furious in the way felines can sometimes be. And he knew how to hold a grudge.

By the time we arrived at Sea-Tac airport I sensed the beginnings of a serious problem. I stared Oscar eyeball to eyeball and he wasn’t the least bit sleepy. Even worse, fire and brimstone stared back. Still, I didn’t panic. The vet said I could break another in half if the first one didn’t knock him right out, so that’s what I did.

Forcing that pill down Oscar’s throat was my second mistake. Fifteen minutes passed as we waited in the car, then I tried to tuck him into the snuggie again. He was having none of it. In fact, he fought back with an unholy howl, flattened ears, and claws primed for battle. Rosemary’s baby didn’t plan to cooperate.

Rather than miss my flight, I conceded defeat. I purchased an overpriced cardboard kennel from the airlines, paid another $128 bucks to buy Oscar a ticket, and sheepishly boarded the plane in my fake maternity clothes.

I believe the airlines suspected my criminal intent, but they didn’t press the issue. Of course, today they would’ve hauled me off in handcuffs, but back then they just took my money with a few well-placed dirty looks. I more than paid for my deceit though. The entire flight I worried about Oscar and the amount of sleeping pills he’d taken. When we arrived on Maui I demanded to see him before they shuffled him over to Oahu for the quarantine.

Turns out Oscar was still wide-awake, still spitting mad, and would barely even acknowledge me as the attendant carried him away to serve hard time in the slammer. I was certain he’d be scarred for life, heaven knew I was, but there was nothing I could do. So I settled into an apartment and spent countless hours on the beach reflecting over the previously unknown criminal aspect of my personality.

Over the next 4 months I flew to Oahu several times to visit Oscar. Truth be told, he had a pretty nice kitty condo with several levels and a big tree branch to climb and scratch on. He was well fed, the enclosure always clean, and though I hated to admit it, he had it pretty good despite being locked away from the free world.

Still, when the day finally came that Oscar was declared rabies free and sprung from the joint, I was waiting at the gate with a brand new pet carrier and a bag full of treats. We went home and over the next several weeks I spoiled him rotten, trying to make up for the trauma he surely endured.

To sum up this tale, here are the lessons I learned.

3) No matter how airtight a plan may seem, nothing is ever foolproof.

4) There’s ALWAYS a chaos factor and its name is forever Oscar.