If you’ve read my other four tales, then by now you might be thinking of Alaska as an adventurous state, perhaps a bit wild, at the very least an interesting place to visit. I’m going to say it’s all that and much, much more. So I should warn you now, this article will run the risk of sounding like a travel commercial. Because no series regarding King Salmon would ever be complete without mentioning the incredible beauty of this part of Alaska.

Granted, when I first arrived in the dead of winter I thought I’d temporarily lost my mind. But it didn’t take too long to realize that I’d had the good fortune to stumble into a place that would become one of the most incredible wilderness experiences I’d ever know. And I’ve known more than a few.

What’s so special about King Salmon, you ask? Well, beyond the crazy summer influx of fisherman and vacationers, beyond the wildly memorable events that marked my time here, there grew this primal connection to the land that was wholly unexpected. There’s such an invigorating sense of living in accord with nature, bracing volatile elements, surviving in a place known for its rugged challenge.

That kind of energy leaves an indelible mark. Spend any time in Alaska and you run the risk of change. With effortless power this state can turn the most staunch city dweller into an outdoor enthusiast. One taste and you’re hooked faster than you can say Sockeye Salmon. I was no exception.

With so much to offer, I had to pick and choose my adventures. I passed on a fishing expedition since it really wasn’t my thing, much to my dad’s utter disappointment. But I did manage to cover a lot of ground. There was the Valley of 10,000 Smokes, I soared in a float plane over rivers, lakes, and glaciers, and I hiked trails full of scenic wonder (being mindful of the fragile tundra, of course). It’s hard to pick a favorite, but the one thing I consistently enjoyed was the wildlife. Eagles, fox, bear, whales, moose, caribou, it’s a veritable zoo out there.

I think I’ll tell you about the most memorable expedition from my time in King Salmon. It came in September, an unofficial reward from the managers at King Ko for surviving a busy summer full of hard work and sweat. About nine of us loaded onto a boat and headed up the NaknekRiver toward an amazing place called Brooks Camp.

Let me tell you, I cannot expound on the glory of this place enough. Scenic views, wildlife adventure, a rustic lodge, and BEARS.

Bears so close you can almost reach out and touch them. Which isn’t generally recommended, by the way. Getting that close to the call of the wild can be somewhat hazardous to your health. But Brooks Camp takes the safety of bears and people very seriously and have built a series of viewing platforms along the Brooks River so we can mingle with the carnivores without worrying about becoming the main course.

Now I have to say, September in Alaska is extraordinarily beautiful. Tundra begins turning autumn colors, the birch and tamarack trees are morphing to gold, and the salmon are plentiful but exhausted after all that spawning. And that makes it a perfect time to take a stroll down the long trails of KatmaiNational   Park, because though the bears are hungry to build winter fat, they have only one thing on their mind – a fishy smorgasbord. 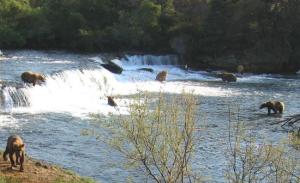 So there I stood, on a platform beside a waterfall on the Brooks River, watching several Alaskan Brown Bears wait patiently for hapless salmon to fly into their hungry jaws. It was a scene straight out of National Geographic. And I knew right then how incredibly lucky I was, despite my lack of a decent camera, and embraced my initiation into the wonders and perils of wilderness exploration. Nature is a strong drug, my friends, and once you’ve experienced its high, you can’t help but want more. But that’s okay, because it’s an addiction that enriches and enlightens, gifts you with the knowledge of primordial connectedness and reveals the spark of the Creator in all flora and fauna.

You see, I’d come to King Salmon on a whim and spent an unforgettable year in a place full of adventure and excitement. I’d arrived a somewhat ordinary girl and definitely out of my element. Yet by the end of that summer I’d been bitten hard by the adventure bug and I emerged a stronger, more confident person. One unafraid to travel to distant places that I’d only read and dreamed about.

One thing is certain, no matter how long I live or where I roam, Alaska will always be at the top of my favorite travel destinations. Honestly, it should be listed in Fodor’s Guide to the Universe as one of the best and absolute must see places on earth. If you’ve ever had even the smallest desire to head that far north, I urge you to act on it. Go to King Salmon, go to KatmaiNational Park, go anywhere inside the state of Alaska and I can promise you rich reward.

It’s just one of those places you have to see to believe.